Congress’s struggle to reform the nation’s tax laws brought a proposal from House Republicans (referred to as the Tax Cuts and Jobs Act), which includes a sweeping change that has drastic implications for spouses going through the divorce process. The Tax Cuts and Jobs Act eliminates the current federal income tax deduction for alimony payors and makes alimony payments tax-free for the recipient. 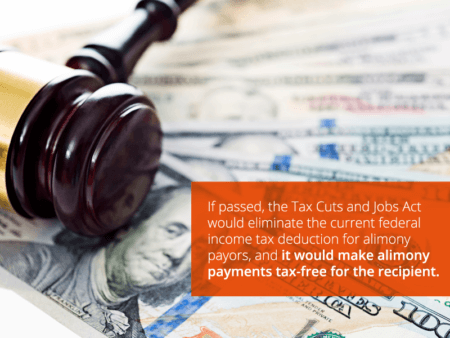 Under the Internal Revenue Code as it stands today, “Alimony is deductible by the payor spouse, and the recipient spouse must include it in income.” The IRS has enforced this rule for years, and it has consistently played a central role in divorces where alimony is involved.

With the tax break for alimony payors, divorcing couples have been able to make strategic use of alimony to maximize financial benefits for both spouses; and, since alimony is (generally speaking) intended to serve as a substitute for earned income, it has made sense for recipients to pay income tax on alimony received.

The proposed Tax Cuts and Jobs Act would reverse the current federal tax treatment for alimony. As proposed, it would apply to divorces finalized in 2018 or later, and would not affect spouses who finalized their divorces on or before December 31, 2017.

According to Reuters, the ultimate goal of the reversal of the income tax rules for alimony is not clear:

“[E]xperts said it was not clear that the House tax reform proposal would generate more revenue. It could, instead, make alimony rarer, and lower the amounts paid.”

Currently, the tax break for alimony payors provides a significant incentive to agree to alimony during the divorce process. However, if alimony payors are required to pay tax on income that they immediately hand over to their former spouses, this incentive goes away. If the Tax Cuts and Jobs Act becomes law, amicable divorces involving alimony could become less common; and, as the Reuters article suggests, it is reasonable to suspect that alimony payments would decrease overall. 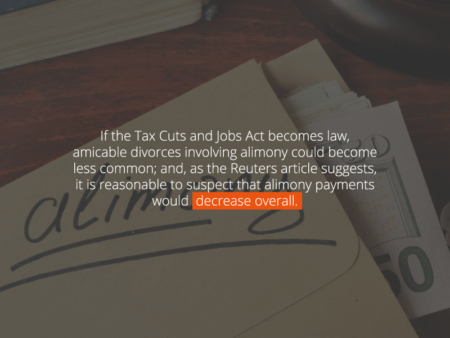 One explanation for the proposal is that it is intended to address the issue of alimony recipients not reporting their taxable income. According to IRS statistics (as reported by Reuters), in 2015, 12 million Americans claimed tax deductions for alimony, while only 10 million reported alimony income. However, if total alimony payments decrease as a result of the Tax Cuts and Jobs Act as anticipated, it appears that neither the government nor divorcing spouses stand to benefit.

Not all post-divorce payments between spouses constitute alimony for federal income tax purposes. The most notable exception is child support; however, there are numerous other exceptions as well. Under current IRS regulations, a payment constitutes alimony only if:

Forms of payment that are not considered alimony include:

If you are preparing to go through a divorce and are expecting to pay or receive alimony, it will be important for you to have a clear understanding of the current tax laws as well as the proposed changes that could have a significant financial impact on the outcome of your divorce. For more information, we encourage you to schedule a free consultation.

Schedule a Free Consultation with a Cleveland Attorney

If you would like to speak with an attorney about alimony and the other financial considerations involved in getting a divorce, we encourage you to get in touch. To schedule a free consultation at our offices in Cleveland, OH, please call (440) 336-8687 or inquire online today.