Ohio law used to allow children of a certain age to choose which parent they wanted to live with after a divorce, but this is no longer the case. Under current Ohio law, minor children cannot choose where they will live once their parents get divorced.

But, this does not mean that a child’s wishes are irrelevant. In fact, the current Ohio child custody statute specifically calls for consideration of the child’s wishes under appropriate circumstances

Section 3109.04(F)(1) of the Ohio Revised Code establishes the primary factors to be considered when establishing custody rights in a divorce. This list is not exhaustive – the law instructs the courts to consider “all relevant factors” – but it covers the most common issues that can play a role in determining the best interests of the children involved.

This “best interests” standard is the overarching principle in all custody-related matters in Ohio, and it helps inform the decision of whether or not (and to what extent) the child’s wishes should play a role. The factors that Ohio courts consider in awarding custody include:

As you can see from the statutory language, the judge presiding over your divorce will not automatically consider your child’s wishes. In order for the judge to do so, he or she must interview your child in chambers (behind closed doors), and then he or she will only consider the child’s wishes as expressed directly to the court.

A judge may interview a child in chambers if either (i) one or both parents requests it, or (ii) the judge decides to do so on his or her own initiative. The judge may also appoint a guardian ad litem to represent the best interests of the child. 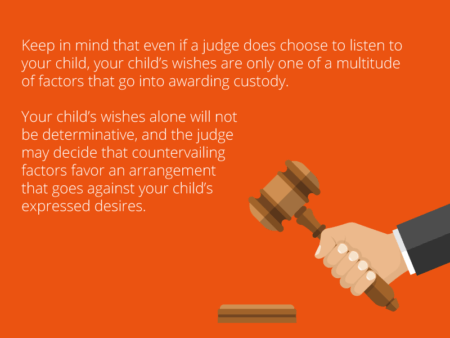 In any case, the Ohio courts will only consider a child’s wishes if it is in the child’s best interests to do so. Among others, this has two primary implications:

Keep in mind that even if a judge does choose to listen to your child, your child’s wishes are only one of a multitude of factors that go into awarding custody. Your child’s wishes alone will not be determinative, and the judge may decide that countervailing factors favor an arrangement that goes against your child’s expressed desires.

If you have questions about how custody rights are determined in Ohio, we invite you to contact us for a free consultation. Our attorneys have extensive experience in divorce and custody matters throughout the greater Cleveland area. To speak with one of our attorneys in confidence, please call (440) 336-8687 or send us a message online today.